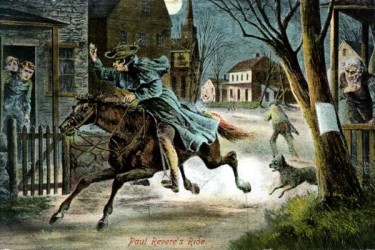 Colonial American farmers loved their freedom in the New World.  They believed the English colony in Massachusetts was a land of opportunity and beauty.  One of the places of real beauty was to be found in a Masonic lodge.  Patriots who were Freemasons were able to meet and greet one another on the level of pure brotherhood. There were just a few such lodges in and around Boston. The soil in Concord grew patriots.  In the spring of 1775 the town had a secret hiding place for the colonists’ military supplies.  The war for independence started here.

The Revolution ended.  The United States of America was created.  It was the first modern nation influenced by Freemasonry.  Corinthian Lodge, in the heart of the town of Concord, was formed in 1797 under the authority of Grand Master Paul Revere.  The first permanent meeting place was in the building across from the Colonial Inn.  The inn was a stopping place for the Grand Master when he made the 20-mile trip from Boston to Concord.  Farming was the principal occupation then.

Corinthian Lodge became the 26th lodge constituted by the Massachusetts Grand Lodge. With the charter in hand, the petitioners met in the grand jury room at the Court House in Concord on July 5, 1797, the day following the annual Independence Day celebration.

During the early American period, New England was thought to be an austere place, but any austerity was on the outside. Inside lodges, like Corinthian Lodge, meetings were held in the warmth and comfort of a tavern’s hospitality. In its first 22 years, the lodge met in six different halls. The first lodge meeting was held in Joshua Jones’ Hall (tavern) on Exchange Street. The last three of these early years were at the County House, where warmth and hospitality continued.

On November 13, 1820, Corinthian Lodge and the Town of Concord dedicated their new brick building that was to be used as a school and the first permanent Masonic Hall. It is said that the young Henry David Thoreau was a teacher here for a short time. From 1797 to 1916, Corinthian Lodge operated as a “moon lodge.”  Its meeting dates were tied to the arrival of a full moon, which helped the brothers traveling on foot and horseback without benefit of electricity.

The first Master was Dr. Isaac Hurd , who later served as Senior Grand Warden and was the son of Benjamin Hurd, for whom the Distinguished Service Medal of Royal Arch Masonry is named. Many notable Masters took office in the ensuing years. Among them were Dr. Lemuel Shattuck for whom the Boston hospital is named; Louis A Surette, a historian and author of many Masonic histories; and Ephraim W. Bull, who developed the Concord grape.

During the 50th anniversary of the battle at the bridge over the Concord River where the farmers stood and fired the shot heard around the world, the Masons of Corinthian Lodge were prominent in the laying of the monument cornerstone on April 19, 1825. 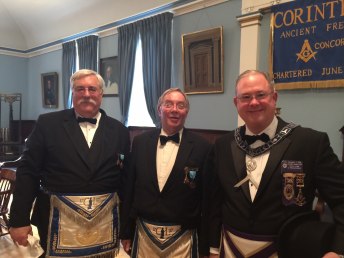 The Masons and their families adore the lodge building.  The center of Concord is rich with homes of colonial architecture, many built before the Revolution. Masonic life and community awareness are intertwined here. With the help of two Master Masons, Paul Revere and William Dawes, and the people of Concord, this Massachusetts town is known throughout America as the birthplace of the American Revolution.